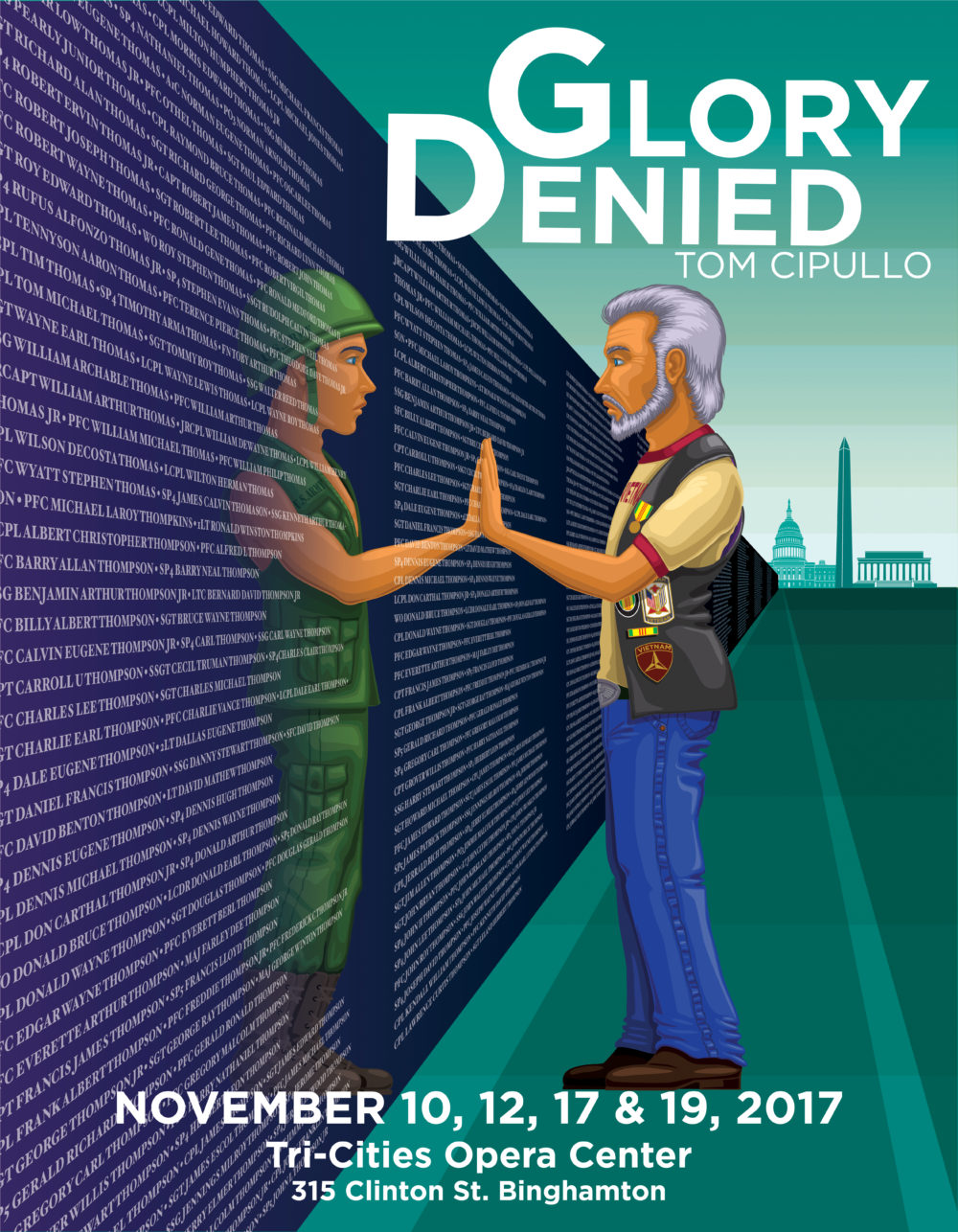 Tri-Cities Opera, the Southern Tier Veterans Support Group, the Vet Center, Clear Path for Veterans and FreshySites are calling on local Veterans to share their “Stories of Service”.

Submissions will be published as a booklet for the upcoming Tri-Cities Opera production of GLORY DENIED in November 2017, including an exclusive FREE performance for Veterans and their families on Veterans Day, November 11, 2017 at 7:30pm. Please call Cara Tilton at the Vet’s Center to reserve your place at (607) 722-2393.

9 Days of Appreciating Your Service

The FREE Veteran performance on Veterans Day 2017 will be the culmination of a greater “9DAYS” campaign (one day for every year of Col. Jim Thompson’s imprisonment). Beginning on November 3, 2017, 9 Days of Appreciating Your Service is envisioned to raise awareness about Veterans in our community and allow Veterans to share their experiences with the public.  Several events are planned in collaboration with many community organizations.

*A FREE performance for veterans and their families on Veterans Day, funded by the Broome County Veterans Services Agency. Please call Cara Tilton at the Vet’s Center to reserve your place at (607) 722-2393.

America’s longest held prisoner of war returns to a country he no longer recognizes and a family who barely recognizes him. Glory Denied, A TCO premier tells of the plight of so many veterans who serve their country, but face incredible challenges when returning home. A man kept alive by hope and prayer during his captivity  in the jungle of southeast Asia, and his personal struggles following his liberation and repatriation. It is a story of a nation divided and a country that changed significantly in the decade of his imprisonment.

Conductor Joshua Horsch will join us in his TCO debut. However, he is not new to Glory Denied, having conducted the production in Pensacola, Florida earlier this year. Director Cara Consilvio, who last directed Hansel and Gretel, will tell this story of compelling relationships through projections to enhance the overall experience.

The characters of Captain Floyd James Thompson and Alyce Thompson are each played by two singers, representing their younger and older selves, as well as the many voices of their recollections. .

Act I
Captain Thompson (Jim), America’s longest-held prisoner of war, recalls episodes of his nine-year ordeal which include escape attempts, torture, the overwhelming loneliness of five years in solitary confinement, and being forced to sign a propaganda statement. He finds the strength to survive in memories of his family, letters from his wife Alyce about their home and children, and thoughts of his elaborate plans to build his dream house.

Pregnant with their fourth child and only son, Alyce receives the news that Jim’s plane has been shot down. Denied any reliable information about his status or whereabouts, she soon begins a relationship with another man (Harold), eventually moving with him to Massachusetts and telling her children that their father is dead. Alyce refuses to have Jim’s name released to the public as Missing in Action, or inscribed on a P.O.W. bracelet, a popular solidarity symbol at the time, and consults a lawyer in an effort to have her husband legally declared dead. Thompson, in captivity, finds comfort in the 23rd Psalm.

Act II
A number of American P.O.W.s are released and Jim returns home, but the Pentagon honors another man, Everett Alvarez, as the longest-held prisoner. With the signing of the Paris Peace Accords, Jim receives a letter welcoming him back from President Richard Nixon, and suggesting that “some things about America may appear to have changed” since his departure. Alyce greets Jim’s homecoming and confesses her new relationship. She offers to go away if that is what he prefers, but Jim wants to reconcile. He notes how life has changed during his nine year captivity and soon the couple begins to fight with Jim complaining that Alyce is not the wife he left behind. Alyce asserts her independence and describes what her life has been like during his absence. Jim, considered a local hero, is asked to give a sermon at the church where he and Alyce were married, and recalls his idealized family life. But Alyce has moved on.

The years pass and Jim, having suffered a stroke, lives alone, estranged from his family, struggling with all that has occurred.