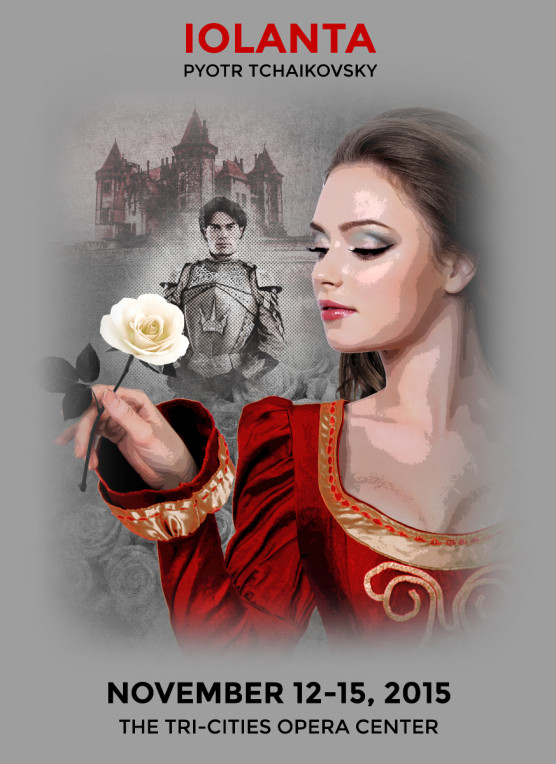 Iolanta
is sponsored by:

Princess Iolanta has been blind from birth, but no one has ever told her, nor does she know she is a princess. She lives in a beautiful enclosed garden on the king’s estate, secluded from the world, in the care of Bertrand and Martha. Her attendants bring flowers and sing to her. She declares her sadness, and her vague sense that she is missing something important that other people can experience. Her father, King René insists that she not discover she is blind, or that her betrothed, Duke Robert, find out out about this.

After announcing the king’s arrival, Alméric is warned by Bertrand not to speak of light with Iolanta or to reveal that Iolanta’s father is the king. The king arrives with Ibn-Hakia, a famed Moorish physician who states that Iolanta can be cured, but the physical cure will only work if she is psychologically prepared by being made aware of her own blindness. Ibn-Hakia sings the monologue “Two worlds”, explaining the interdependence of the mind and the body within the divinely ordained universe, which merges spirit and matter. The king refuses the treatment, fearing for Iolanta’s happiness if the cure should fail after she has learned what she is missing.

Robert arrives at the court with his friend Count Vaudémont. Robert tells Vaudémont that he wishes to avoid the marriage as he has fallen in love with Countess Matilde. He sings of his love in his aria “Who can compare with my Mathilde” (Кто может сравниться с Матильдой моей). Vaudémont finds the entrance to Iolanta’s secret garden, ignoring the sign which threatens death to anyone who enters. He sees the sleeping Iolanta, without realising who she is and instantly falls in love. Robert, astounded by his friend’s behavior, is convinced she is a sorceress who has bewitched Vaudémont. He tells him to leave, but Vaudémont is too entranced. Robert departs to bring troops to rescue him. Iolanta awakes and Vaudémont who asks her give him a red rose as a keepsake, realises she is blind when she twice offers him a white one. She has no concept of light, vision or blindness. They fall in love, after he explains light and color to her.

The couple is discovered by the king. Vaudémont pledges his love, whether Iolanta is blind or not. Ibn-Hakia tells the king that as Iolanta is now aware of her blindness, the treatment might be a success. Iolanta who has no will to see, is unsure therefore whether she should agree to treatment or not. Ibn-Hakia points out that the lack of will proves that without inner desire change cannot take place.

After Vaudémont admits seeing the warning sign at the garden entrance, the furious king threatens to execute him for revealing the truth to Iolanta. He tells Iolanta Vaudémont will die if the physician fails to restore her sight, in the hope that this will restore her will. Iolanta is horrified, and agrees to the treatment. After Ibn-Hakia leaves with Iolanta, the king explains to Vaudémont that he was feigning in order to motivate Iolanta. Robert returns with his troops. He admits to the king he has fallen in love with another, but is still willing to go ahead with the agreed marriage. The king cancels the wedding contract, and gives Iolanta to Vaudémont. Ibn-Hakia and Iolanta return. The treatment has worked and Iolanta can see. At first uncertain of her new gift, she eventually sings of the magical new world now visible to her. The court rejoices.