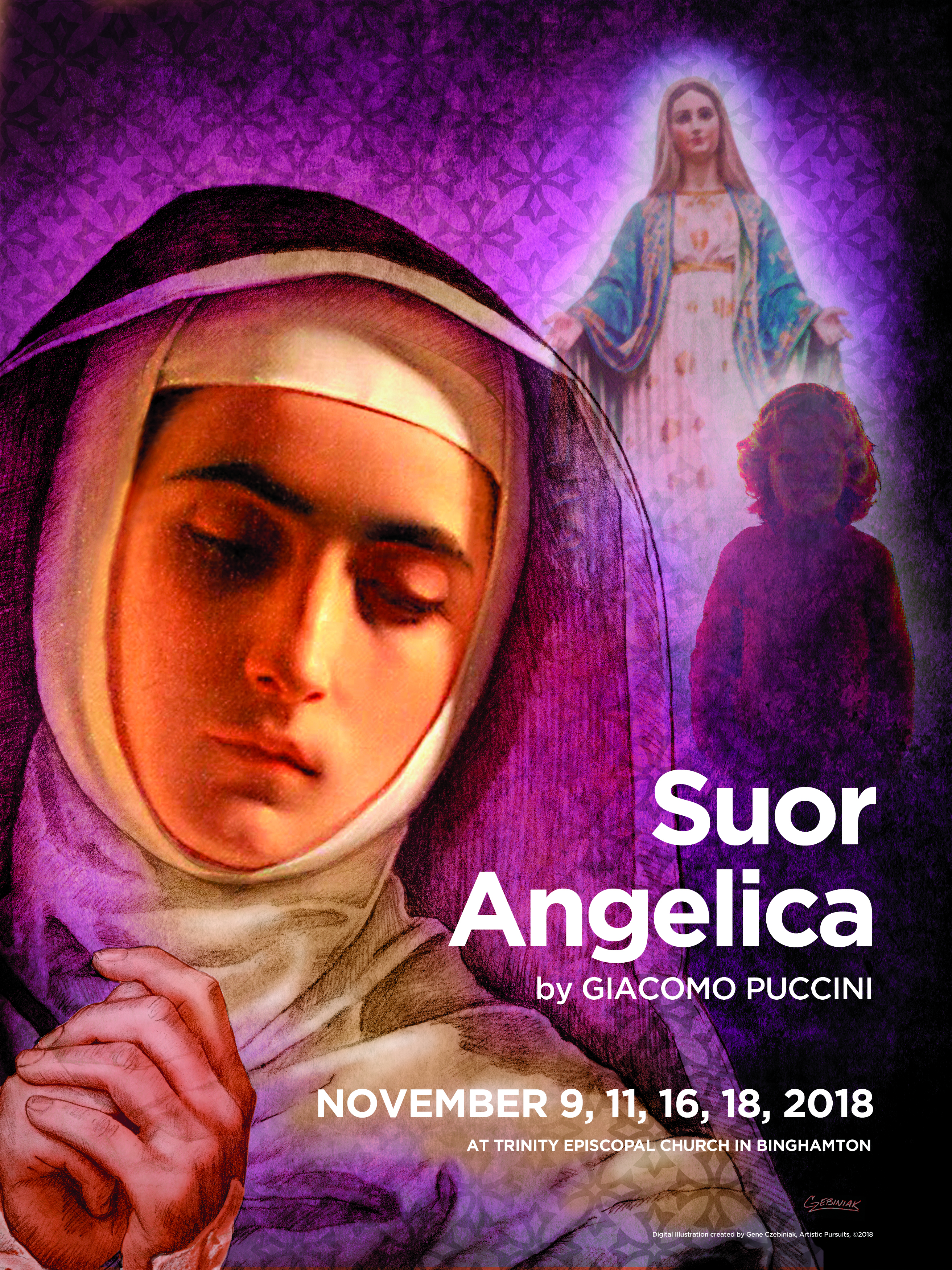 Suor Angelica is a unique one-act opera set in a 17th century Tuscan convent, containing moments of harrowing drama and unequaled redemptive beauty. The story take place over one day and intensifies as it unravels.

Cara Consilvio will return to direct after directing Hansel and Gretel and Glory Denied, with Music Direction by John Cockerill. The production will be presented as immersive theatre in Trinity Memorial Episcopal Church and will include Pietro Yon’s Sonata Cromatica for organ played by Trinity’s organist Timothy Smith, Mozart’s Exsultate Jubilate sung by Lianne Aharony and Barber’s Hermit Songs, sung by Gina Moscato.

The scene is the cloisters and garden of a convent in the late 16th century.
The opera establishes the daily life of the convent, nuns at prayer in the chapel, the Mistress of the Novices counselling her charges and so on. The sisters are excited by the annual occurrence of a natural phenomenon, on only three evenings a year the rays of the setting sun give the water in the font a glow as if the water is golden. The sisters decide they will sprinkle some of the golden water on the tomb of one of their recently departed community.

Sister Angelica has learned about the use of herbs in making potions to cure various illnesses and brews up one to ease the pain of a wasp sting. Angelica has been in the convent for seven years and is saddened by the fact that she has never had any contact from her family. She now hears that a very grand carriage has arrived at the entrance and Angelica instinctively knows it is a visitor for her. The Abbess comes to tell Angelica that her aunt, the Princess, has arrived.

Although eager to embrace her aunt, Angelica finds the Princess is cold and unfriendly, offering her only a hand to kiss. She harshly greets her niece, blaming her for the disgrace she brought on the family by having a child out of wedlock. She has come because Angelica’s younger sister is to be married and Angelica must sign a document renouncing any claim on the family fortune.

Angelica declares that she repents her sin, but cannot forget her son, who she only saw once. She begs her aunt to tell her of the boy’s welfare. Reluctantly the Princess tells her that the child was taken ill two years previously and has died. Once the document is signed the Princess departs and left alone, Angelica sings of the agony of her child dying without his mother’s blessing. The sisters try to comfort her but Angelica believes that a heavenly grace has descended on her and she knows the path she must take.

As the other nuns go to their cells for the night, Angelica mixes some herbs with the water from the font and in a trance like state she drinks the potion, which is in fact a poison. Too late she realises that she has sinned in committing suicide. In anguish she prays for forgiveness. The chapel doors open and an apparition of the Virgin Mary appears with a small white clad child, whom she urges toward Angelica. As the angelic choir sings Salve Maria, Angelica embraces her child and falls to the ground dead; happy in the knowledge she has achieved divine forgiveness.

With the possible exception of Suzuki in Madama Butterfly, Puccini wrote very little of interest for a mezzo. In Suor Angelica the soprano of the title is matched in dominance by her aunt, the Princess, a contralto whose iron will and cold resolve make her a memorable villain.