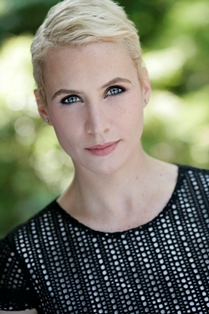 Stage Director Alison Moritz’s recent productions have been lauded as “about as gorgeous and accessible as any opera anywhere” (The Commercial Appeal), and her work has been praised for its “incredible economy of resources, lean production design, and eye for jest and banter” by The Orlando Examiner. Alison’s upcoming projects include a full season directing new productions of American opera; including The Manchurian Candidate(Austin Opera), Candide (Orlando Philharmonic), The Tender Land (Crane School of Music), Our Town (Townsend Opera, Fresno Grand Opera), andHydrogen Jukebox (Tri-Cities Opera).

Recent directing projects include Die Zauberflöte (Opera Memphis, Orlando Philharmonic) and The Hobbit (Tulsa Opera). Along with the design collectiveThe Libertine Committee, Alison was named one of the 2015 winners of theOPERA America Director-Designer Showcase for her team’s concept proposal for The Cradle Will Rock.  A “rising young star on the contemporary American opera scene” (89.5 Tulsa), Alison also recently received the SDCF Kurt Weill Fellowship for 2015-2016.

Previously, Alison served as the Resident Assistant Director at both the Minnesota Opera and The Atlanta Opera. Her professional credits include engagements with Seattle Opera, Opera Theatre of St. Louis, Wolf Trap Opera, Central City Opera, and Chautauqua Opera. As a teacher and guest director, Alison has taught at Eastman School of Music (Interim Faculty, 2012-2013), Maryland Opera Studio (2016), and for Steven Blier and Caramoor’s Vocal Rising Stars program (2016).

Alison continues both her acting training and administrative interests and has worked and trained with companies such as the SITI Company of New York City, OPERA America, Geva Theatre Center, Third Rail Projects, Nautilus Music Theater, and Shakespeare Festival St. Louis. She holds a B.A. in Music and Art History from Washington University in St. Louis and an M.M. from Eastman School of Music.