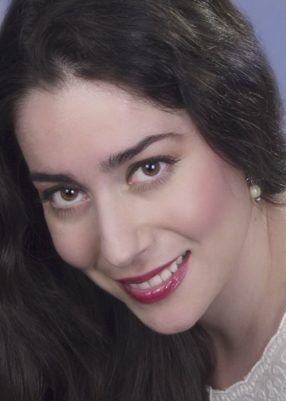 Andréa Gregori (soprano), began her career as a dancer/choreographer but found her passion in opera, concert, and musical theater. With Theatre Street, she has appeared in many living history performances throughout the northeast and abroad, including a debut at the world-renowned Newport Music Festival in 2014, and a return engagement in 2016. She made her European debut at the International Gilbert & Sullivan Festival in England in 2015 and performed at the Festival in Gettysburg, PA in 2011. She has appeared with the Casals Festival in Puerto Rico, Tri-Cities Opera, Ash Lawn Opera, Four Corners Opera, Central Florida Lyric Opera, Orpheus Theatre, Summer Savoyards, Cider Mill Playhouse, and Endicott Performing Arts Center (EPAC) in a number of leading roles. In 2011, she made her debut with the Ti-Ahwaga Performing Arts Center as Maria Callas in Master Class, for which she was praised as being “magical…a force to be reckoned with.” She then reprised the role at the historic Casino Theatre in Newport, and multiple venues in upstate New York. Ms. Gregori has twice been featured at the annual NY State Sports & Entertainment Celebrity Gala, singing for dignitaries, celebrities, and Olympic Gold Medalists. She has appeared in concert with Metropolitan Opera artists, the late Enrico Di Giuseppe and Dominic Cossa, and coached with Licia Albanese and organist Searle Wright. She was a three-time recipient of the E.S. Kardon Grant, two-time winner in the NATS Eastern Regional Voice Competition, and a finalist in the Schorr International Voice Competition and Connecticut Opera Guild Voice Competition. Other recent engagements include Desiree in A Little Night Music with the Ti-Ahwaga Performing Arts Center, Lady Thiang in King & I, Johanna in Sweeney Todd, Mazeppa in Gypsy at EPAC, Mother Abbess in Sound of Music for Millbrook Playhouse’s 50th anniversary season, and Lady Psyche in Princess Ida for Cornell University’s 150th anniversary celebration. Recent and upcoming performances include a debut at New York’s National Opera Center and Eliza Doolittle in My Fair Lady at EPAC to commemorate the musical’s 60th anniversary. Ms. Gregori holds degrees from Temple University and the University of Denver and serves as Vice-Chair of the Art Mission & Theater and Phelps Mansion Museum in Binghamton, NY. She is the founder and Artistic Director of Theatre Street Productions, which received grants from the Chenango Arts Council for Master Class and My Fair Lady. She currently serves as TCO’s Director of Community Engagement.