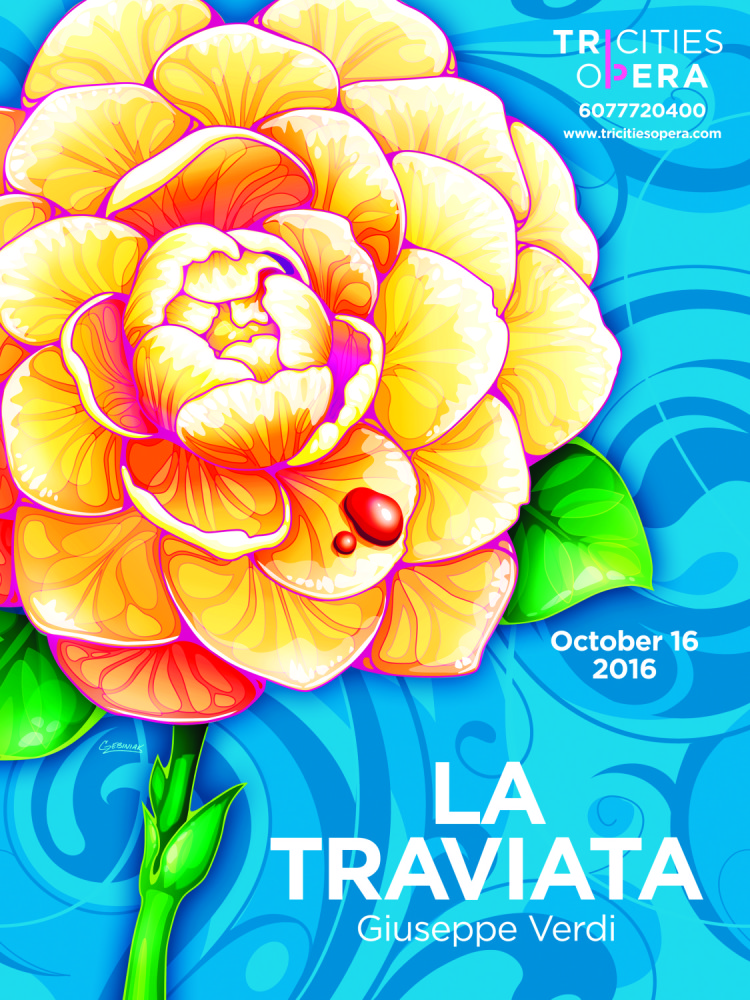 Tri-Cities Opera’s 68th season will open with a brand-new, sleek production of Verdi’s masterpiece, LA TRAVIATA. Complete with costumes, stage movement, and a new scenic design by AmarA*jk, Verdi’s spectacular music will be the star as Stage Director, David Lefkowich’s vibrant imagining of Violetta’s sad tale of love, lies and loss draws the Tri-Cities Opera Orchestra (led by conductor Vlad Iftinca) out of the pit and onto the stage. Meroe Khalia Adeeb returns to shine as Violetta, the courtesan. Johnathan Riesen makes his Tri-Cities Opera debut as her lover, Alfredo Germont, and as his father, Giorgio Germont, TCO favorite, Timothy LeFebvre, brings his commanding voice and presence back to the Forum Stage. A seamless interweaving of music and storytelling awaits you at this ONE DAY ONLY event.

Join us after the show for Violetta’s Soiree, a festive after-party at the DoubleTree by Hilton to celebrate the opening of our 68th season.  CLICK HERE for more details.

Violetta Valéry, a young courtesan, famous in the Parisian high society, throws a party in her home. Here, Gaston, Viscount of Letorières, introduces a new admirer to her, Alfredo Germont. He confesses that the moment he saw her, he was fascinated by her beauty and intelligence, though he has never had the courage to tell her. He toasts in her honor before the whole crowd.

Suddenly, she almost faints and everyone jumps in to help, but she asks them to go away. However, Alfredo remains and sincerely declares his love for her. At first she treats him with indifference, trying to reject him, but then realizes that she has never known true love and wonders whether this provincial, honest young man will be able to convince her to love him.

He whispers words of love, warning her that her adventurous life will ruin her health. Violetta knows this, because she is suffering from tuberculosis, but she does not accept the truth and prefers to continue living in luxury and endless parties.

To have the chance to talk to him again, she gives him a flower telling him to return it when it has faded, in hope that they will meet soon.

Violetta and Alfredo have been together for three months and have withdrawn to a country house to escape their previous life. Alfredo discovers, however, that Violetta is selling all her belongings to secure their livelihood. Upset that he had not thought of this aspect of their relationship, he decides to go to Paris to raise money.

Meanwhile, Violetta receives an invitation to a ball organized by her friend Flora. But she has abandoned that lifestyle, gave up all parties for Alfredo’s sake, and no longer wishes to assume the role of a courtesan. While Alfredo is away, his father, Giorgio Germont, arrives at the house. Alfredo had hoped that Violetta’s promise to give up her life as a courtesan would persuade Germont to bless their relationship. Even though he discovers that Violetta is a kind and selfless woman, Germont asks her the impossible: to break up with his son. At first, Violetta refuses, but then she finds out that Alfredo has a sister who is getting married and her fiancé would never accept to form an alliance with a family in disgrace. Violetta understands that her status as a courtesan and her relationship with Alfredo could compromise the young girl’s future. Grieved, she decides to give up Alfredo and asks Germont to promise her that after she dies, he will explain to his son the reason why she leaves him now.

Alfredo returns and receives a letter of separation from Violetta. Then, Germont reappears to speak privately with his son. He pleads with him to return home. Unmoved by his father’s request, Alfredo sees Flora’s invitation to the ball and angrily decides to go there to ask her for some explanations.

At Flora’s ball, people are talking about Violetta’s break up with Alfredo. Violetta arrives accompanied by Baron Douphol. Blinded by jealousy, Alfredo appears. Thinking that the Baron is Violetta’s new lover, Alfredo challenges him to play and rebukes him repeatedly. Alfredo is followed by his father, who tries to temper him. Extremely troubled by the encounter with Alfredo, Violetta asks to speak to him privately.

When everyone else retires, Alfredo secretly asks Violetta to run away with him. She refuses, hiding the promise she had made to his father. She lies to him that her new lover is Baron Douphol. In anger, Alfredo publicly humiliates Violetta, throwing money at her feet and saying he has repaid her. Giorgio Germont, who witnessed the scene, along with everyone else, violently rebukes him and the Baron challenges him to a duel.

Violetta, having spent all of her money, lives her last moments in a modest Paris apartment. The only ones who stay by her side are Annina and Dr. Grenvil, who tells Annina that Violetta has merely a few hours to live. The carnival is underway in the streets of Paris and the cheers of the masqueraders can be heard. Violetta sends Annina to give the last bit of money she has to the poor, so that she may be alone to read a letter from Giorgio Germont.

Full of remorse, he confesses that he had written to his son about her sacrifice and that they will soon come to visit her. Their return occurs too late, because Violetta is going through the final stages of her illness. Alfredo confesses once more his love for Violetta, who dies comforted by the thought that she has received the forgiveness of the man she loved.