THE BARBER OF SEVILLE 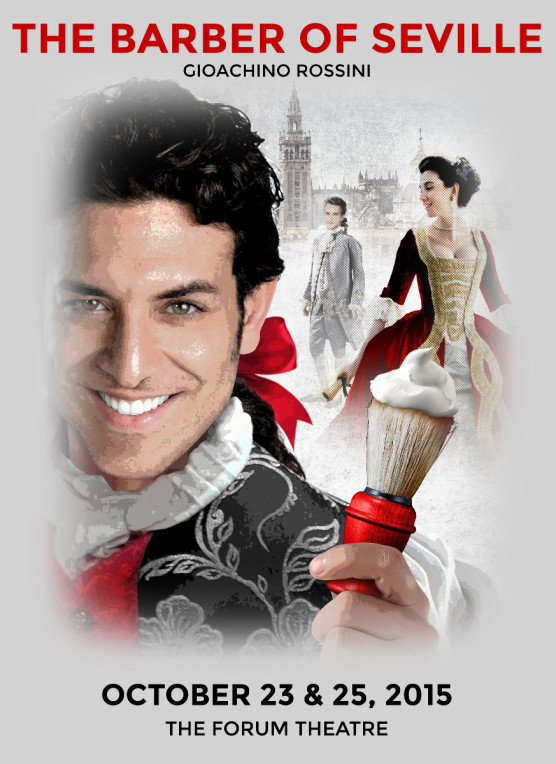 Tri-Cities Opera opens it’s 2015-2016 Season with Rossini’s most famous opera, The Barber of Seville.   This charming comedy features a vibrant young cast and lively music conducted by Vlad Iftinca, along with JJ Hudson as the Stage Director. This production is dedicated to Tri-Cities Opera co-founder Peyton Hibbitt in honor of his 90th birthday!

At night, Count Almaviva brings a band of musicians to serenade Rosina; she is the ward of Dr. Bartolo, who keeps the girl confined in his house. When Rosina fails to answer Almaviva’s song, the count pays the players and they leave. At the sound of Figaro’s voice, Almaviva steps away as the barber bounds in, boasting of his busy life as the neighborhood factotum. Figaro, though currently in Bartolo’s employ, encounters Almaviva and promises to help him win Rosina—for a suitable reward. No sooner has Bartolo left the house to arrange his own marriage with Rosina than Almaviva launches into a second serenade, calling himself “Lindoro,” a poor creature who can offer only love. Figaro suggests Almaviva disguise himself as a drunken soldier billeted to Bartolo’s house. Alone in the house, Rosina muses on the voice that has touched her heart and resolves to outwit Bartolo. Figaro joins her, but they leave on hearing footsteps. Bartolo enters with the music master, Don Basilio, who tells him Almaviva is a rival for Rosina’s hand and advises slandering the nobleman’s reputation. Bartolo agrees, but Figaro overhears them. Warning Rosina that Bartolo plans to marry her himself the very next day, the barber promises to deliver a note she has written to “Lindoro.” Rosina, alone with Bartolo, undergoes an interrogation, then listens to his boast that he is far too clever to be tricked. Berta, the housekeeper, answers violent knocking at the door, returning with Almaviva disguised as a drunken soldier in search of lodging. While arguing with Bartolo, Almaviva manages to slip a love letter to Rosina. But when Bartolo demands to see the letter, the girl substitutes a laundry list. Figaro dashes in to warn that their hubbub has attracted a crowd. Police arrive to silence the disturbance. As an officer is about to arrest him, Almaviva whispers his identity and is released. Rosina, Berta, Bartolo, and Basilio are stupefied by everything that is happening.

Bartolo receives a young music teacher, “Don Alonso” (again Almaviva in disguise), who claims to be a substitute forthe ailing Basilio. Rosina enters, recognizes her suitor and begins her singing lesson as Bartolo dozes in his chair. Figaro arrives to shave the doctor and manages to steal the key to the balcony window. Basilio now comes in, looking the picture of health; bribed by Almaviva, he feigns illness and departs. Figaro shaves Bartolo while Almaviva and Rosina plan their elopement that night. They are overheard by the doctor, who drives Figaro and Almaviva from the house and Rosina to her room, then sends again for Basilio. Berta, unnerved by all the confusion, complains she is going mad. Bartolo dispatches Basilio for a notary, then tricks Rosina into believing “Lindoro” is really a flunky of Almaviva. After a thunderstorm, Almaviva arrives with Figaro and climbs through a balcony window to abduct Rosina. At first the girl rebuffs “Lindoro,” but when he explains that he and Almaviva are one and the same, she falls into his arms. Figaro urges haste, but before they can leave, their ladder is taken away. Basilio enters with the notary. Though summoned to wed Rosina and Bartolo, the official marries her instead to Almaviva, who bribes Basilio. Rushing in too late, Bartolo finds the lovers already wed. When Almaviva allows him to keep Rosina’s dowry, the old man accepts the situation.